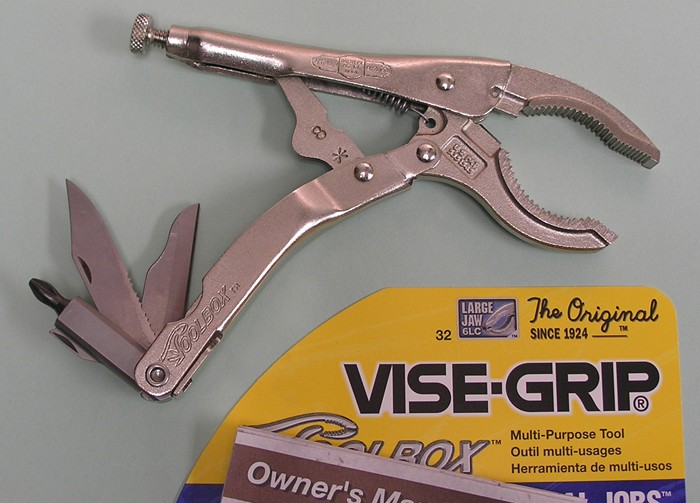 The regular 6LC model with large jaws (non-multitool) had been in the Vise-Grip line for years prior to 2002. The previous year, Vise-Grip and Schrade Cutlery had teamed up to produce the 5WR Toolbox, a locking plier multitool. In 2002 this duo expanded the line to include the 6LC Toolbox and the Schrade ST6 Tough Grip needle nose version.

Jaws are heavy cast steel that has been chrome plated. The upper jaw is welded solid to the upper handle. An important feature of Vise-Grip's Large Jaw line is their ability to grasp around pipes and such for plumbing or welding.

There is a serrated gripping area and an anvil type wire cutter.

Handles are a much heavier gage of steel than most multitools. Also note that there is no lock release lever as found on other Vise-Grip pliers, making it more difficult to open the pliers when they have been clamped heavily.

6LC is cast into the plier jaw. VISE GRIP is stamped into one handle, the TOOLBOX logo into the other.

A patented locking mechanism engages a slot in the back of the lockable blades. Pressing downwards on a neighboring blade releases the lock.

Included with the tool was a reversable phillips/flathead screwdriver bit.

Special "limited edition" sheath was a form-molded leatherette affair, with open top. Loop on the back allowed for vertical carry only.

Introduced in 2002. Joint venture between Vise-Grip and Schrade Cutlery. Made in USA.

The 6LC shares many of the same components with the Vise-Grip 5WR Toolbox and the Schrade ST6 Tough Grip.