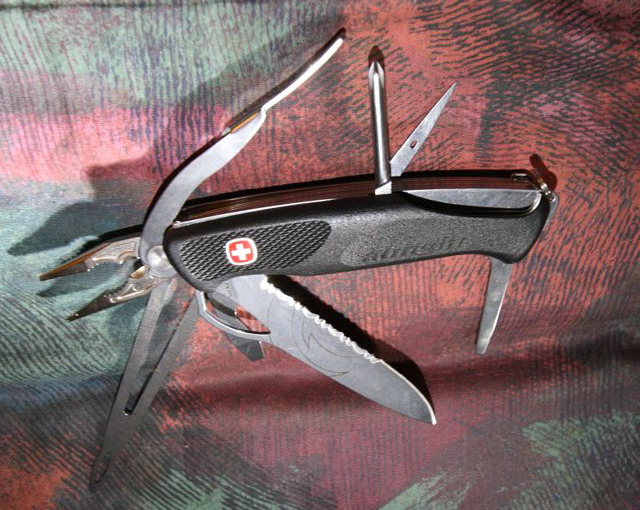 The Alinghi is the flagship of the Wenger NewRanger series. This knife is named after the Swiss America's Cup winner, and is made for boating. The main blade on the Alinghi 176 features one-hand-opening â€” particularly useful on pitching deck where you need your other hand to hold on to the rail! The Alinghi was the first knife from to appear with Wenger's new full-size folding pliers, which put this knife into the multitool category. There is a marlinspike/shackle-opener/ruler, as befits a nautical knife. There also is Wenger's auto-locking screwdriver/bottle-opener, along with a long, 3.5mm screwdriver, an awl, and either a Phillips (Alinghi 176) or a corkscrew (Alinghi 177).

The Alinghis are equipped with nylon scales, contoured in the Evo style to fit the hand. Deep checkering is molded into the thumb area on both sides. It is only available in black. One side carries the Wenger cross logo, along with "alinghi" and the Wenger name molded in. The cross logo icon itself is actually a push button, which when depressed releases the liner lock on the knife blade.

The Alinghi knives have a partly-serrated main blade with drop point profile. There is a wave pattern on the blade. WENGER is stamped near the base. Overall length is 3-3/4" (95mm). It is one-hand-opening on the Alinghi 176.
On the backspring:

The NewRanger series was introduced in 2007. They are produced in Switzerland. Of the variations listed above, at this time only the Model 176 is being imported to North America.

The Alinghi knives are part of the the Wenger NewRanger plier knives series.