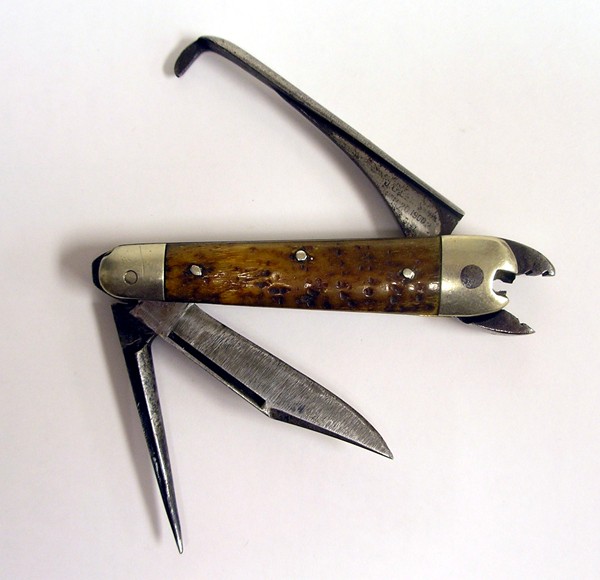 By far the most well-known of the vintage multitools is the Barnett Plier-Knife. Patented at the end of the 19th century, the Barnett was by no means the first multitool. However, it WAS the first multitool to be mass produced, widely distributed, and generally available to everyone at a modest price. Also commonly known as the HHH knife, it was built for and marketed by a surprisingly large number of companies.

The Barnett is based upon a sturdy solid-handle plier mechanism. The plier jaws themselves are quite short, limiting their usefulness somewhat. Crude serrations are cut into the faces of the jaws for better grip. There is also a hard-wire cutter section designed for dealing with barbed wire fencing or bailing wire.

Handle scales are of jigged bone, with brass bolsters on either end. Brass pins hold the scales onto brass liners. (Produced in the days before stainless steel, the use of brass to avoid corrosion was a recognized mark of quality.)

The Barnett came equipped with either a spear point or a clip point knife blade, and a well-designed reamer/awl blade. The awl blade is cut with deep flutes and sharp edges, allowing it to bore holes in wood or leather.

Like most tools and knives from this era, the blades do not lock in place.

In the base of the Barnett there is a flathead screwdriver blade contoured into the steel liner plate.

Both of the brass bolsters at the front of the tool have cut-outs in them, which can be used as small wrenches. There are two sizes of wrench, a different one on each side.

The end of the plier handle doubles as a hoof pick, used for digging pebbles and debris from horse's hooves.

It is uncertain exactly how long the various manufacturers produced Barnett Tools. Old advertisements still show new ones available into the late 1910â€™s. (see scans below) There was some minor evolution to the design during these fifteen-plus years of production. Sometime along the way, light checkering was added to the plier jaws for a better grip, the groove pattern in the jaws themselves were altered, and the plier handle/hoof pick was beefed up and strengthened. Other subtle variations include a wide variety of stampings and logos on the base of the plier handle and knife blade. An extremely rare variation has been noted with a flip bail for lanyard attachment.

Both spear point and clip point knife blade profiles have been noted. However, knife blade logos from makers such as Cattaraugus and Camillus are thought to be replacements added later, and not original.

The design of the Barnett Plier-Knife was patented on November 20, 1900 by James Catlin Lewis of Tracey, California. It was then apparently built for and marketed by a large number of companies. The majority were produced by Oscar Barnett in New Jersey. Many hardware wholesale houses distributed them, as did national retail mail order firms such as Sears & Roebuck Company. The most common stamping noted is "O. Barnett Tool Co., Newark, New Jersey", along with the "Trade HHH Mark" logo on the knife blade itself. The HHH marking is thought to refer to House-Hasson Hardware of Knoxville, Tennessee, apparently an exclusive distributor of this knife.