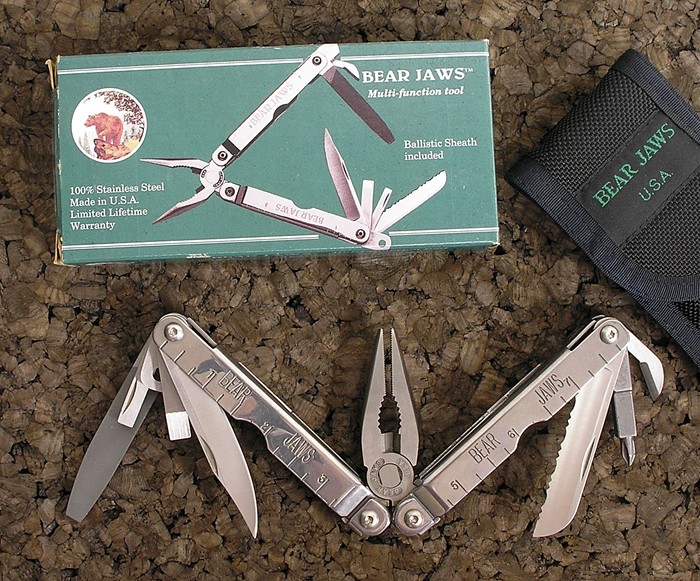 At first glance the Bear Jaws tool appears to simply be a copy of the Leatherman PST. But the Bear has one important advantage, that being it's outside opening blades. This blade arrangement is relatively common today, but it was revolutionary when first introduced back in 1996. So much so that Swiss Army Knife giant Victorinox reportedly bought Bear MGC in order to obtain the patent. The company is now back in the hands of an original owner, but the Vic SwissTool and Spirit owe their legacy to the Bear Jaws 155.

Jaw shape is needlenose, with fine serrations and a gripping area. Bypass wire cutters are near the pivot. (No hard wire notch is included)

Handles are sheet metal bent into a channel shape. The sheet metal itself is noticably thicker than any other similar multitool. Pivot screws are torx drive.

BEAR JAWS is stamped into both handles. One side of the tool is stamped with an inch scale, the other side in metric.

Finish is a high polish stainless all over.

Blades did not lock on the original 155 model. See Variations.

An often-overlooked advantage of Bear multitools is the ease at which the implements can be changed to suit the user. Spare components can be obtained directly from the manufacturer.

Later models featured a leather backing with cross loops that allowed for both vertical and horizontal carry.

The Bear Jaws 155 tool evolved somewhat over the years. In addition, there were several different models produced as well as numerous varients produced and sold by other companies. (rebrands)

The Bear Jaws Electrician 155EL is based on the same frame and handles.