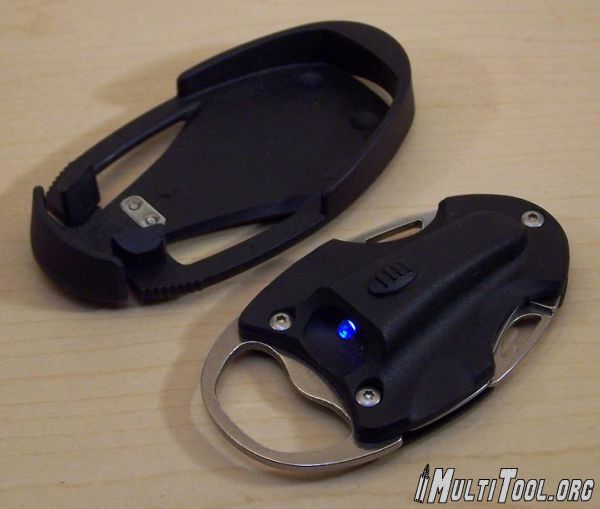 The Cicada from Columbia River Knife and Tool is a radical departure from the plier style multitools we are familiar with, and is a revolutionary new design that promises to have quite a future. Designed by Dana Bainbridge and Joseph Sundby of Roundhouse Media in Portland, Oregon, the Cicada is produced under the IDWorks banner.

The intricate frame of the Cicada has a clip on the back for mounting the tool itself to a belt or strap. The Cicada itself is built around a bottle opener and LED light with fold out tools.

The slip jointed knife blade on the Cicada is approximately 1-1/2" long (40mm). It features a drop point profile, with a large thumbhole although one handed opening is awkward due to the small size of the Cicada and strong backspring. Opposite the knife blade is a small set of scissors

The Cicada features a detachable frame that remains clipped to a belt or other securing medium, while the tool is used, then snaps back together securely and easily.

Introduced at the 2009 Shot Show, became generally available that spring.