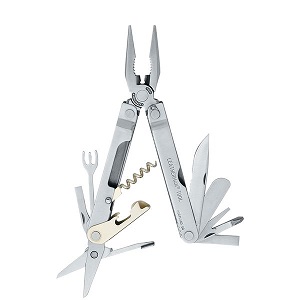 The Leatherman Flair was the first attempt at an outside the box tool. It has a few tools that no Leatherman before it had and some tools that no Leatherman after it had either. A corkscrew, bottle opener/corkscrew assist, a spreader knife and a cocktail fork. The frame and pliers of the tool along with a few of it's other tools still make this tool feel like all the other Leatherman tools of this time period though. It is a very odd and unique tool that is getting harder to find with each passing year. It is a very high quality tool just as all the tools of that era. It is also the forerunner of the Juice series of Leatherman tools as well.

It is possible that the plier head may have been updated to a newer design during it's 5 year run but I have never saw an example of this. Overall this tool remained unchanged while in production. The name of the tool is stamped on the corkscrew assist along with a grapevine and grape design.