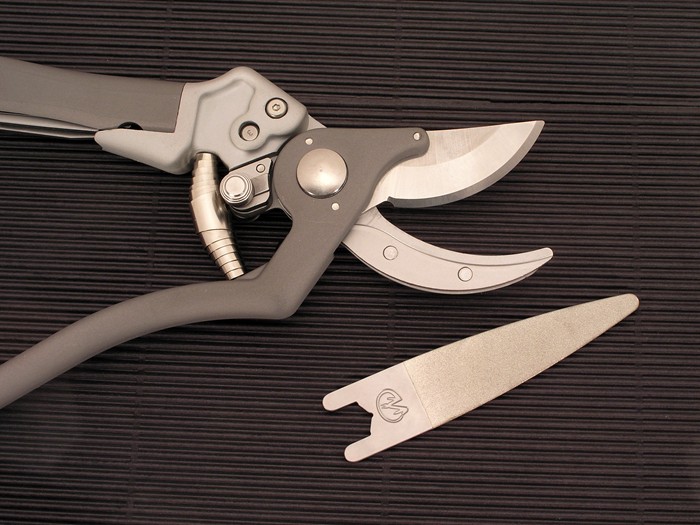 The Genus is a commercial grade pruning multitool designed for the professional landscaper. As such, it employs heavy duty construction throughout. Unlike its cousins the Hybrid and the Vista, it does not fold up into a smaller unit. Packaged along with the Genus are useful accessories such as an open top belt sheath and a combination diamond file/disassembly wrench.

The cutting jaws consist of two slabs of precision ground and hardened stainless steel. The lower jaw is riveted to the aluminum frame. The upper jaw is held in place by pins, and is easily removable for sharpening or replacement.

In addition to the razor sharp pruning edges, there is a soft wire cutting notch in near the pivot.

Handles and frame on the Genus are very strong, made from solid cast aluminum.

Depressing the large button on the side of the frame allows the upper handle to rotate. This gives the user ready access to the blades and tools housed within.

A sliding safety lock button locks the pruner jaws closed when not in use. It is accessible on both sides of the tool. (ambidextrous)

A decal inlaid into the side of the handle is marked LEATHERMAN Genus.

There is no date coding on the Genus.

All the blades and tools lock open.

The Genus employs a toggle lock similar to the Crunch, Core, and other multitools. Somewhat unusual though is the way the toggle overhangs the sides of the handle. Knurled surfaces on the overhangs allow the user to pull (rather than push) the lock out of engagement with the blades.

A large black nylon sheath with open top is included. It has two extra accessory pouches in the front and a large metal belt clip in the back. It is intended for vertical carry only.

Announced by Leatherman in 2007, the Genus was not generally available until later that year. Made in the USA. Discontinued in 2010.

Although they are altogether different in construction, the Hybrid and Vista are other pruner multitools produced by Leatherman around the same time.