Get A Way Driver 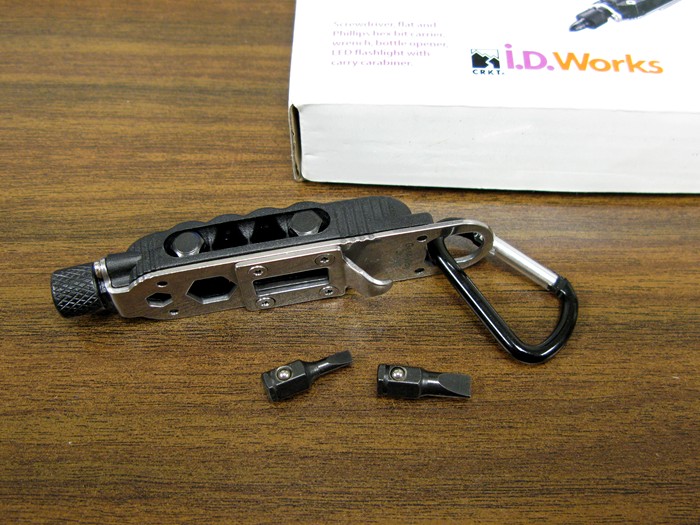 The Get A Way Driver is an innovative tool that can stand alone or support a variety of other tools. It also benefits from being convenient enough to store or be carried almost anywhere, including a key chain

Single stainless steel handle with molded plastic frame that holds 4 standard 1/4" hexagonal bits and an LED flashlight. The steel frame also incorporates a loop that can be hooked on a carabiner (included) or directly on a key chain or other tie down. There is also a removable bottle opener bolted to the frame. The steel and plastic components also come together to hold a bit driver end that accepts standard 1/4" bits, but also serves as an adaptor for the smaller hexagonal slot found on the Zilla-Tool Jr.

The body contains 2x Phillips bits and 2x slotted or flathead bits. All four bits have a black coating and a ball to lock them into place.

In 2009 a new Torx bit version will be available, and the black plastic body will be replaced by a blue body to differentiate the two models. Other than color and bit types, there are expected to be no differences in the two models.

Not yet released Torx version, also related to Zilla-Tool Jr as it's bit adapter is designed to fit in the smaller hexagonal slot.