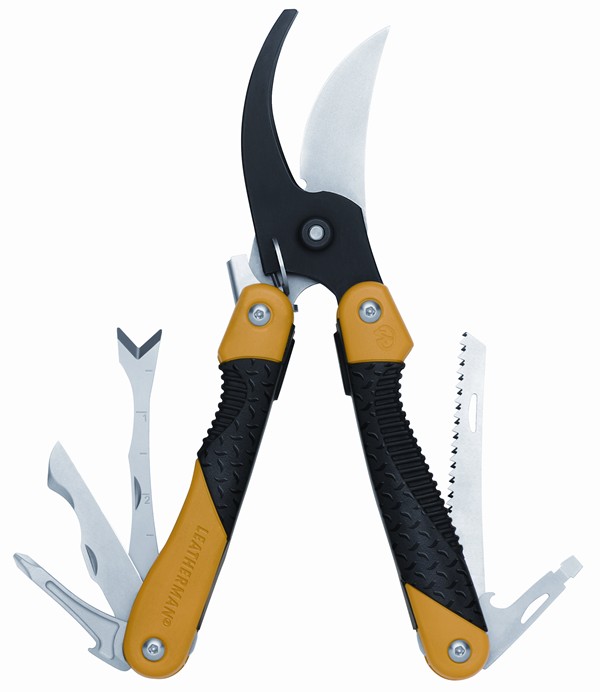 Along with its stable mate Vista, the Leatherman Hybrid represents somewhat of a departure from the company's traditional offerings. Instead of pliers, it is based on a large set of folding pruner jaws. (secateurs) Also unusual are the bright yellow plastic handles and soft rubber grips. The Hybrid was designed as a gardening multitool, and has a number of features included specifically for that purpose.

The pruner jaws on the Hybrid are of the bypass type. (as opposed to the anvil type) Jaw opening is such that branches up to 3/4" (20mm) will fit between them. There is also a soft wire cutting notch at the base of the pruner section.

The jaws are spring-loaded by means of a hidden clothespin spring. A thumb activated safety lock bar holds them in the closed position when not in use.

The Hybrid's handles have an underlying frame made from a U-shaped channel of stainless steel. Attached to the steel is a contoured set of scales made from high impact yellow plastic. Overmolding the yellow plastic are inlays of soft black rubber, positioned where the hand would normally grip. Despite being an inside-opening style tool, the Hybrid is not uncomfortable to squeeze hard on.

The opposite handle includes a weed cutter tool with a 3" ruler stamped on it, a Phillips screwdriver, and a grafting knife blade. The knife blade is 2-1/4" long (57mm) and has a modified sheepsfoot profile to it. On the backside of the blade is a ground section that the User's Guide refers to as a bark lifter (see picture below)

The sheath is made from heavy black nylon. The top does not close, and it is designed to carry the Hybrid either in the folded or the unfolded position. The backside has a traditional belt loop, along with a heavy spring steel pocket clip for quicker carry.

On early models of the Hybrid, the jaw pivot was secured by a large flathead screw which threaded into a boss cast into the black jaw. Occasionally the locktite used on the screw would fail, allowing it to tighten during normal use, jamming the shears. This pivot method was replaced in early 2007 by a button head socket screw and a self-locking hex nut.

Leatherman Vista pruning tool. While of a completly different design, the Leatherman Genus is also a pruner based tool produced at the same time as the Vista and Hybrid.