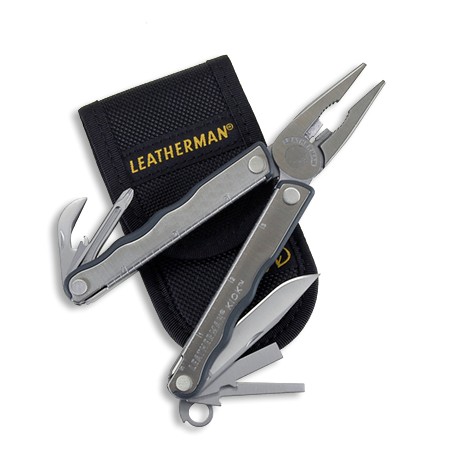 2004 saw a major reshuffling of Leatherman's multitool lineup. Gone were the traditional PST, PST II, and SideClip. In their place were the new Kick, Fuse, and Blast. Zytel plastic inserts for a more comfortable grip and a plier head re-engineered to be stronger are the most notable changes. The Kick model has the fewest features of any tool in this group.

Jaw shape is standard needlenose, but the elliptical pivot area appears to be significantly stronger than previous Leatherman tools. There are fine serrations running out to the tips, a gripping area below that, and a wire cutter area near the pivot. A hard wire cutting notch is also included.

One whole side of the plier head on the Kick is ground flat, apparently to allow space for the knife blade when the tool is folded. This makes the Kick pliers slightly thinner than they would be otherwise.

Along with the Fuse and Blast, the Kick was the first tool from Leatherman to feature contoured Zytel plastic inserts for a more comfortable grip. It can be assumed that the plastic inserts add somewhat to the sturdiness also, as the gauge thickness of the stainless steel handle material has been reduced somewhat from previous models.

An inch scale is stamped onto one side of the Kick, a metric scale on the other.

One of the lower blade pivot screws is drilled and tapped. A pocket clip accessory is available which attaches here by means of a knurled torx screw.

Two options existed for included sheaths. One was a pancake nylon affair with velcro closure, pictured at the top of this page. The other was rectangular in shape, with a snap closure, made from a leather-like substance.

Earliest Kicks had a double-wide plastic boss to fill in space alongside the plier head. Later models used a stainless steel washer.

Introduced in 2004. Made in USA. Discontinued in 2012. Preceded by the Sideclip