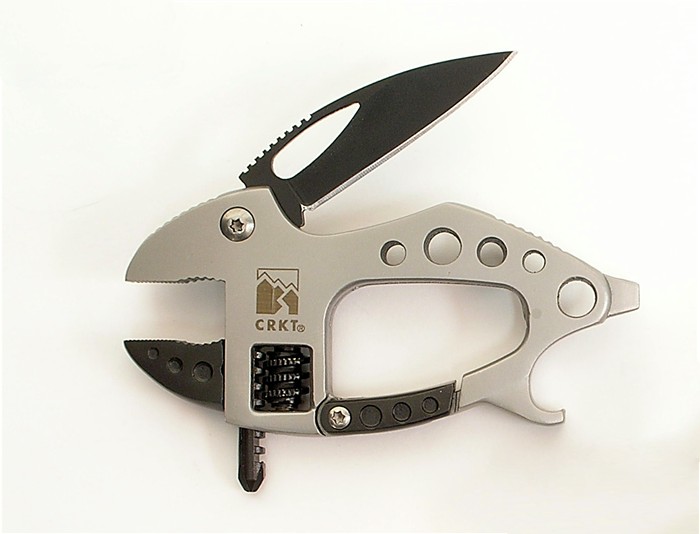 One year after introducing the original Guppie, Columbia River brought out a scaled down version and christened it the Li'l Guppie. Gone is the on-board bit carrier and LED light, but the tradeoff is a thinner smaller tool that is more convenient to carry.

Unlike regular wrenches, the wrench jaws on the Li'l Guppie are serrated, like plier jaws. There are fine serrations out to the tip, with a coarse serrated gripping area in near the base. Maximum jaw opening is 7/16 inch (11mm).

The intricate frame of the Guppie is cast and cut from a single piece of stainless steel. Finish is bead blast stainless, with a few components given a deep black finish for contrast.

Utilizing a spring loaded gate, a large cut-out portion of the frame functions as a carabiner. (Note that the carabiner is not intended for weight-bearing applications.)

The knife blade on the Li'l Guppie is 1-1/2 inch long (40mm). It features a drop point profile, with a large thumbhole for one hand opening.

In 2009 an all black version of the Guppie will be made available.

Introduced at the 2008 Shot Show, became generally available that spring.

The Li'l Guppie is a direct descendent of the original full-sized Guppie.