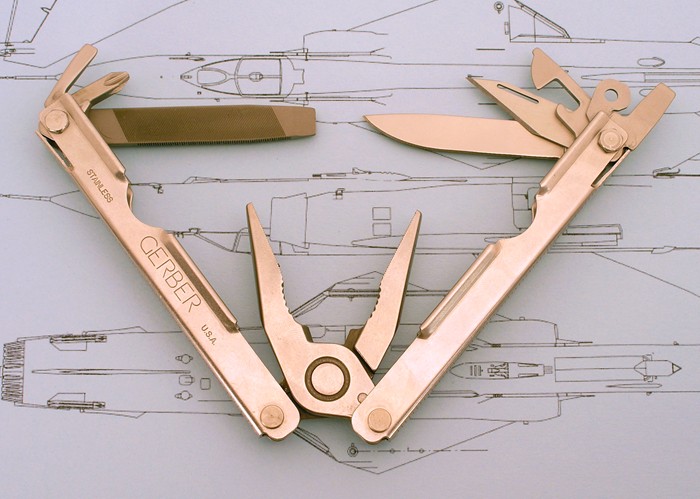 The Military Provisional Tool #5 was an unexpected surprise from Gerber in the early 1990's. No one expected the company that pioneered the sliding jaw concept to bring out a butterfly opener. Legend has it that Gerber developed the tool in order to compete with Leatherman for a U.S. Government order. The MPT won the bid, and Gerber went on to produce the tool for the civilian market. It was generally considered to be the "economy" model in Gerber's line.

As the MPT was Gerber's only butterfly opening tool for many years, its jaws do not resemble those of any other tool from that company.

Jaw features include fine serrations, a gripping area, and a wire cutter area. (No hard wire notch is included.)

Each handle is comprised of a channel of stainless steel sheet. In response to complaints at the time about Leatherman tools, the edges of the MPT's handles have a rolled edge for more comfortable plier use.

Finish is matte stainless all over.

Cutouts in the handle channel allow access to nail nicks in the blades.

GERBER is stamped in large font on one handle. STAINLESS and USA are stamped in small font. Inch and metric scales are stamped along the spines of both handles.

Blades and drivers were shared with other Gerber sliding-jaw multitools. Therefore they are all shorter than they would otherwise need to be.

Like almost all multitools of this era, the blades tend to clump when opening.

Many MPT's came with a genuine leather sheath with embossed basket weave pattern and snap closure. Loop allowed for vertical carry only.

In addition to the standard stainless finish, the MPT was also produced with a black oxide finish.

For whatever reason there seems to be a large number of slight variations in MPT production: