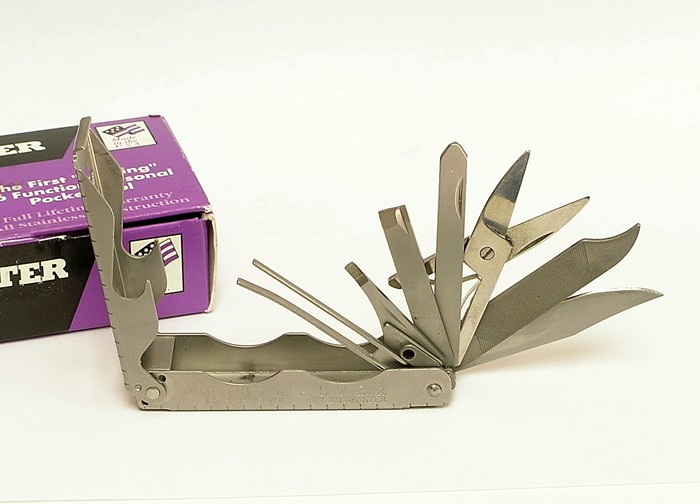 The MiniMaster is basically a little box full of folding blades. It employs the same "locking L" mechanism for locking the blades open as first seen on the MultiMaster. Produced for years in Utica New York, more recent examples appear to be imported from Asia. Knock-off variations of the MiniMaster abound.

The frame is made up of two halves that fold together to form a box. The hinge area has two sets of detents. One set holds the box lid closed, the other set holds it open.

Material is stainless steel, which has been given a matte bead blast finish.

MINIMASTER is stamped into one side in large font. In smaller font it says BY KUTMASTER and USA PAT PEND. An inch/metric scale is stamped on the bottom side.

The MiniMaster has seven folding implements:
In addition there is a folding lanyard attachment ring

All blades lock open using a unique feature Kutmaster refers to as the "Locking L" safety device. Once a blade is fully opened, closing the lid of the box causes a tab to engage a slot at the base of the blade. This prevents the blade from accidentally closing during use. The method is crude, but effective.

The underside of the lid can has a built in bottle opener.

Introduced in the late 1990's. Produced in Utica New York up until the mid-2000's. Recent examples show evidence of Asian manufacture.

Many cheap imported tools resemble the box-full-of-folding-blades concept of the MiniMaster.