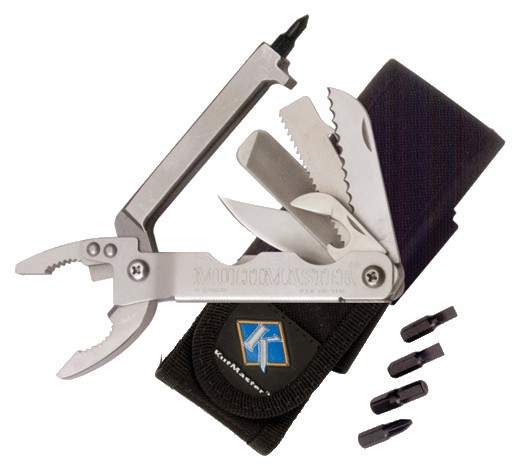 The MultiMaster tool was one of the first multitools to go up against the then newfangled Leatherman PST. Manufactured by Kutmaster, an old time cutlery company from Utica New York, the tool has the crude yet rugged construction of the late 1980's. Almost thirty years later it is still listed in the company's catalog, virtually unchanged.

Plier jaws were offered in two versions: needlenose, and blunt nose. Both models have fine serrations near the nose, a gripping area below that, and a bypass wire cutter area near the pivot. (No hard wire notch is included)

Being a "solid handle" design, one jaw is an integral part of the plier handle, while the opposite jaw is pinned to the frame with two rivets.

The plier handle is a single piece of cast steel. It has a hex bit driver in the end, and a "Locking L" tab to engage the blades.

The frame is a piece of sheet steel folded into a channel shape. One side is stamped MULTIMASTER in large font. In smaller font it says BY KUTMASTER and USA PAT PEND. An inch/metric scale is stamped on the bottom side.

Finish is bead blasted stainless all over.

The plier pivot and blade pivot are rather unusual in that they use Phillips head screws.

The MultiMaster has five folding implements:

All blades lock open using a unique feature Kutmaster refers to as the "Locking L" safety device. Once a blade is fully opened, depressing the plier handle causes a tab to engage a slot at the base of the blade. This prevents the blade from accidentally closing during use. The method is crude, but effective.

There is a hex bit driver receptacle in the end of the plier handle. It uses a small magnet to retain the bits. (Later changed to a circlip.)

A large, tri-folded nylon sheath was generally included with the MultiMaster. It had a pouch for carrying a kit of spare hex bits (also included) and a velcro closure.

The MultiMaster was produced in both needlenose and blunt nose plier configurations.

At some point the magnet in the hex bit driver was changed to a circlip.

At some point production of the MultiMaster was moved overseas. Quality of these Chinese-made tools does not differ much from USA-made tools. They can be distinguished by a complete lack of markings on the frame, as well as a poorly shaped head on the plier pivot. In addition, a new "scissors" type pivot has been utilized on the plier jaws.

In addition to tools sold with the MultiMaster logo, the company also produced and rebranded these tools for a number of other firms. Following is a partial list: (Unique characteristics are mentioned)

Per Kutmaster, the MultiMaster was developed in 1988. It was produced in the USA up until the early 2000's, but recent examples show evidence of Asian manufacture.

The KutMaster Wrench-Head tool shares similar features with the MultiMaster.

Mountain Quest, an import brand belonging to KutMaster, produces a version of this tool called the 17 Function Multitool.