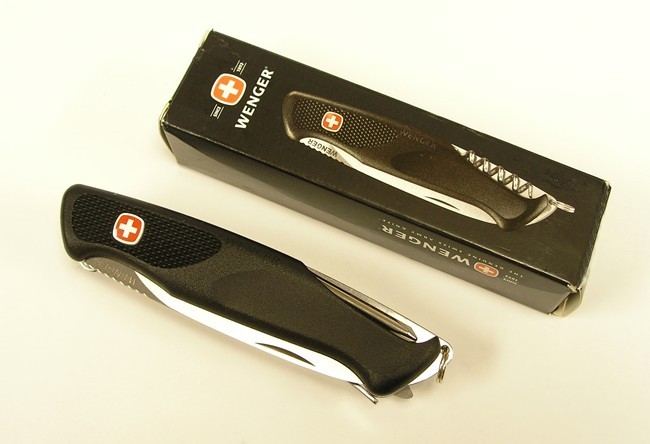 Wenger introduced a wide variety of 120mm NewRanger knives in 2007. Evo contoured grip panels and a push-button lock release distinguish them from the previous Ranger series. Most exciting of all, an elegent folding scissor mechanism (and folding plier on some models) was developed which gave the NewRangers the ability to compete with full sized secateurs and shears-type multitools from other makers.

NewRangers are equipped with nylon scales, contoured in the Evo style to fit the hand. Deep checkering is molded into the thumb area on both sides. It is only available in black. One side carries the Wenger cross logo, along with the Wenger name molded in. The cross logo icon itself is actually a push button, which when depressed releases the liner lock on the knife blade.

The scissor and scissor handle are a clever three-piece assembly that folds completely away when not needed. Despite this complex function they are quite strong and rugged.

The scissors themselves are spring loaded, powered by the backspring.

Note that the scissors and handle are both somewhat thinner than their counterparts on the NewRanger plier knives, resulting in the entire tool being slightly thinner.

The NewRanger scissor knives are equipped with different blade selections depending upon the model. Following is the blade selection of the Model 71 Gardener. See VARIATIONS below for other models.
On the backspring:

NewRanger scissor knife models differ only in their blade selection. See BLADES above for those included with the Model 71 Gardener. Additional models are as follows:

The NewRanger series was introduced in 2007. They are produced in Switzerland. Of the variations listed above, at this time only the Model 172 is being imported to North America.