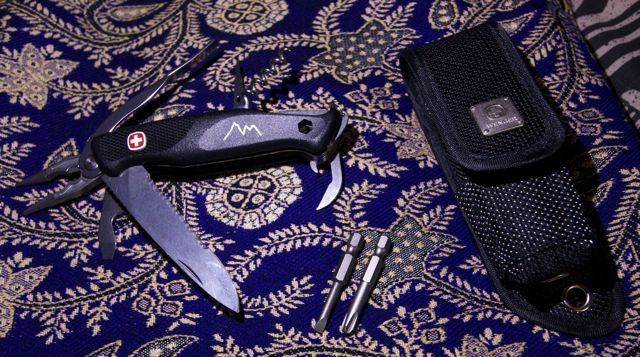 The NewRanger Touring 174 is the 2008 Patrouille de Glaciers knife. It features Wenger's new full-size folding pliers and a bit-driver in the handle. The main blade is partly serrated. There also is Wenger's auto-locking screwdriver/bottle-opener, a can opener, an awl, and a Phillips.

The Alinghis are equipped with nylon scales, contoured in the Evo style to fit the hand. Deep checkering is molded into the thumb area on both sides. It is only available in black. One side carries the Wenger cross logo and an outline of a mountain, along the Wenger name molded in. The cross logo icon itself is actually a push button, which when depressed releases the liner lock on the knife blade. There is a hexagonal hole for the bit driver, which goes through a scale and several backsprings for support. One of the backsprings provides spring tension to keep the tools in. The bit driver accepts standard 1/4" screwdriver bits. 2 are included (1 small flat, 1 large Phillips).

The Touring 174 has a partly-serrated main blade with drop point profile. There is a wave pattern on the blade. WENGER is stamped near the base. Overall length is 3-3/4" (95mm).
On the backspring:

Black nylon sheath included. 4 pockets in outside of sheath for bits.

The Touring 174 is part of the the Wenger NewRanger plier knives series.