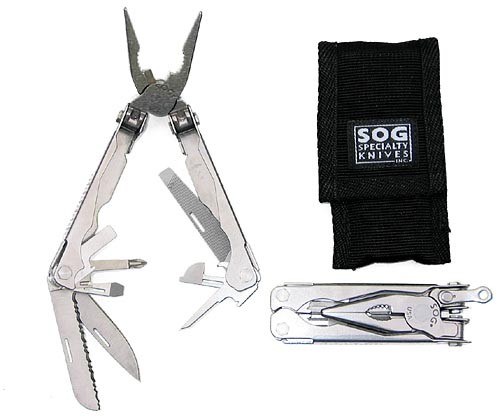 In continuous production for over fifteen years, the ParaTool was the first multitool from SOG to be manufactured in the USA. Its unique design allows the pliers to be operated at various angles, reaching into areas that other multitools can't. However, this very ability which defines the ParaTool is not without shortcomings.

The plier head on the ParaTool pivots thru 180 degrees of arc, from fully closed to fully open. This allows it to be "bent" around obstacles and other hard-to-reach areas. (see top picture at right)

Jaws are standard needlenose profile, with fine serrations to the tips, a gripping area below that, and wire cutters near the pivot. No hard wire notch is included.

Starting a trend that exists to this day with SOG multitools, the jaws on the ParaTool are of the opposite "hand" than most other pliers. Presumably this is so that when loosening a bolt with the jaw tips, they will be less likely to deform and result in crossed tips. (Victorinox recognized this also, and in 2002 reversed the "hand" of the SwissTool plier heads.)

Handles on the ParaTool fully enclose one side of the tool, but are open on the other side to accept the pivoting plier head. The enclosed side has an inch scale on one handle and a metric scale on the other.

A series of small lightening holes exist along the spine of each handle, presumably for increased grip.

An attached tab allows the plier head to be flipped open. The tab has a ring on the end for a lanyard attachment. On early models this tab was attached by a hex bolt. Later models use a rivet.

As with most SOG tools, the pivot screws are standard hex head, allowing the user to change or replace blades as needed. Accessory blades are available direct from SOG.

Standard sheath for the ParaTool is a woven nylon affair with velcro closure. It can be carried either vertical or horizontal.

Also available was a molded plastic carry pouch, form fitted and made especially for the ParaTool. It featured a pocket clip on the backside, with the name Blackie Collins molded in. (see photo at bottom of page)

The first ParaTools can be identified by having a PAT PEND stamping on the side. (After the first year or so they were stamped with a US PATENT number) These original tools also had a different configuration to the plier pivots, a bolted flipper lever instead of riveted, and extra lightning holes on the handles. PICTURE

For many years the ParaTool was provided with a matte finish. (Tumbled, not bead blasted) Later S31 stainless models were highly polished, probably as an added measure against corrosion.

A B31 black oxide finish was also available.

Based upon an original concept by the reknowned cutlery designer Blackie Collins, the ParaTool was further refined by SOG before introduction in 1992. It is still in production over 15 years later.