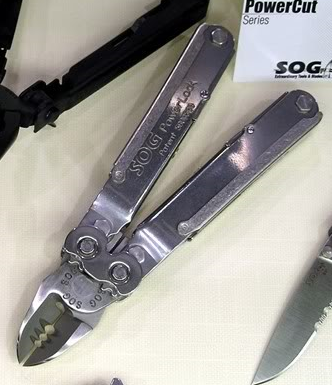 Announced early in 2007, the PowerCut was a much anticipated, but ultimately failed attempt to make a side cutter based multitool. Based on the PowerLock 2.0 frame (which was in turn based on the Power Play PT-525) the PowerCut sadly never came to market, due to issues with the investment cast jaws breaking in use. The production of this tool proceeded so far that SOG actually brought a prototype to the 2008 SHOT Show. However, SOG never worked out the problems with the jaws breaking, and eventually gave up on the project altogether. 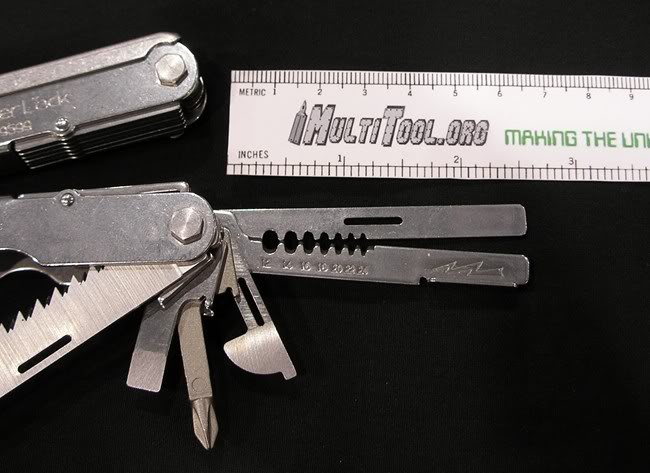 Rather than traditional multitool plier jaws, the PowerCut is a side cutter based tool. The jaws are powerful wirecutters, and take advantage of SOG's compound leverage technology to increase performance and ease of use. Spaced out near the center of the cutter jaws were three wire stripper notches for 10, 12 and 14 gauge wires. On the opposite side of the jaws, there is a section of plier-like serrations, a feature that is common on many side cutters. There is also a wire crimper at the base of the gripping area.

The PowerCut was based on the PowerLock 2.0 frame, complete with gear covers, updated tool covers, and Piano-Locks.

The PowerCut was going to be offered in both Stainless steel and Black Oxide finishes, model numbers S68 and B68 respectively.

The PowerCut used the experimental Piano-Locks that SOG introduced in 2008 along with the PowerAssist and the PowerLock 2.0.

Announced in 2007, the PowerCut project was an effort by SOG to create a side cutter based multitool aimed at electircal workers. The original promotion pictures show two different iterations of the PowerCut prototypes. What can be assumed to be the earlier prototype was based on the original PowerLock frame, which was easily identified by the lack of gear covers. This early prototype's jaws resemble traditional side cutter shapes, if perhaps a bit narrow. There were no plier serrations between the handle, only a wire crimper.

The later version of the PowerCut prototype was brought to the 2008 SHOT Show, and is very likely the same tool that appeared in the 2007, 2008 and some 2009 SOG Product Catalogs. The shape of the Jaws is a bit more angular, especially just above the pivot. This version of the cutter jaw is also noticeably wider than the original shown in the 2007 promotional materials. At this stage in production the PowerCut was still sporting PowerLock 2.0 handles, complete with "PowerLock" inscribed on the handles. It is unknown (but unlikely) if any handles specifically for the PowerCut were made.

Through its short life, SOG officials say that the PowerCut had serious issues with the top jaw snapping off at the pivot (shown in the picture at right). The method of investment casting SOG used to create the PowerCut's cutters (and SOG's plier jaws) was simply not strong enough to perform as side cuters. Too much material had to be removed for the cutters to function correctly. Normal side cutters are normally forged, but SOG officials say they did not have the means to forge the PowerCut's jaws in house. Since SOG could not resolve the issue with the jaws breaking, the whole project was eventually scrapped in early 2009.