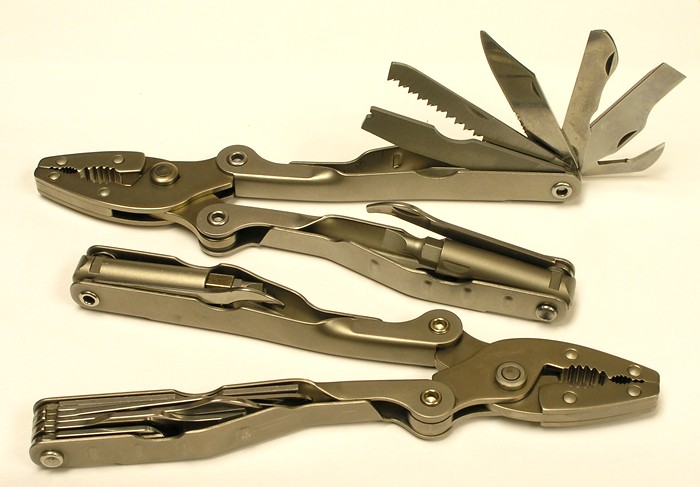 Schrade's ST5E Tough Tool was the first plier multitool with adjustable slip jaws. (Spyderco's SpydeRench employed this feature earlier, but in a less conventional tool) The slip jaw allows the pliers to get a grip on larger objects such as pipe or bolt heads. However, the jaw and handle arrangement of the ST5E make it one of the largest most inconvenient-to-carry multitools ever. The slip jaw also makes the tool annoyingly difficult to fold up at times. 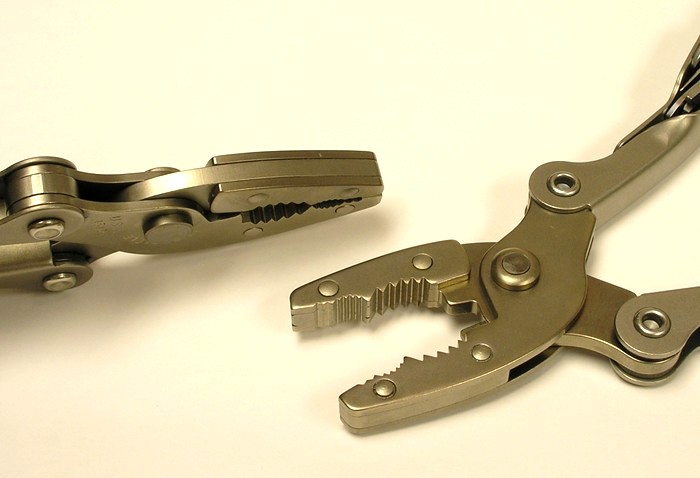 Jaw construction on the ST5E is made up of laminated plates of steel, riveted together.

Note that the laminations allow one jaw to pass directly through the other jaw, making for an incredibly strong pivot.

The ST5E is unique in its ability to adjust to two different size jaw openings. (see photos at bottom of page)

Jaw serrations are very sharp and aggressive. Bypass wire cutters are blunt, and appear to be intended for hard wire.

Handles are bent in a complex shape, forming a complete rectangular tube at one point.

All pivot points are rivets, not screws.

Finish is matte bead blast stainless all over.

The SCHRADE TOUGH logo is stamped in one handle, patent info in the other. No inch or metric scales are present.

A patented locking mechanism engages a slot in the back of the lockable blades. Pressing downwards on a neighboring blade releases the lock.

The single hole in the handle was intended as a lanyard attachment point.

As stated above, early models carried a hex reducer with two 1/4" hex bits. Later models only had one double-ended 5/16" bit.

Introduced at the 2003 Shot Show. Made in the USA for less than two years before Schrade closed.

Schrade produced the same tool for Sears Craftsman. The Model 45471 Professional Multitool differs from the ST5E only in its markings. It was available in 1999, several years before the ST5E was offered under the Schrade logo.