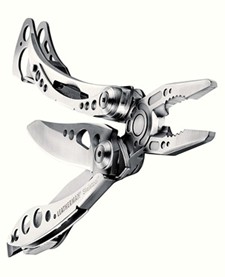 At first glance the Skeletool appears to be a radically new device for Leatherman, but in fact it incorporates several design features from earlier Leatherman products, including layered backsprings similar to the Juice line, the carabiner/bottle opener from their knife line, and a flattened bit driver similar to those found on the Wave and Charge tools. Designed with an eye towards minimum weight and maximum carryability, the Skeletool embodies the belief that a tool is no good unless you have it with you. As such, it offers both a pocket clip and a carabiner to encourage EDC. 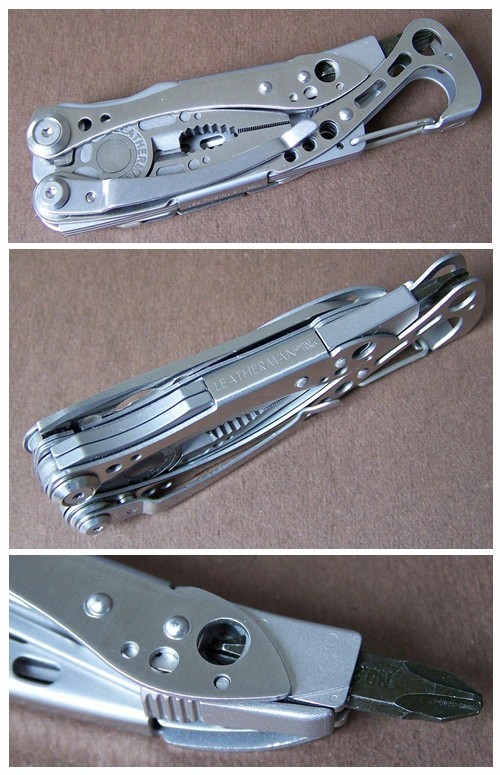 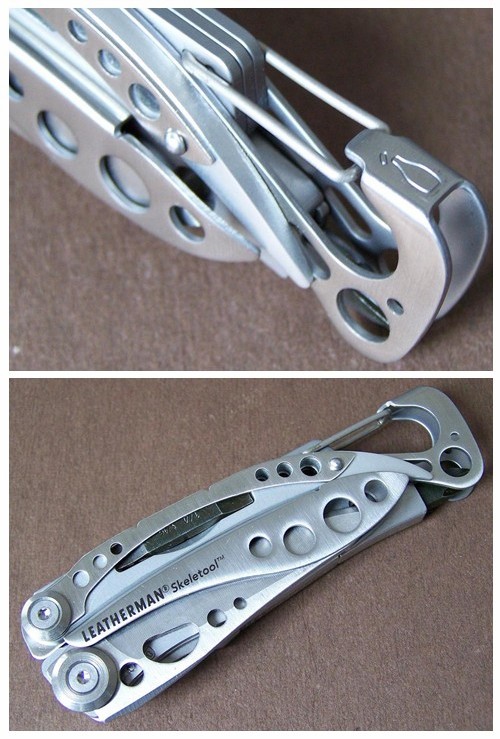 Plier jaws are larger than the Squirt P4 jaws, but considerably smaller than full size jaws found on the Kick or Charge. Best comparison would be with the Juice series of tools.

There are fine serrations near the nose, a gripping area below that, and a wire cutter area near the pivot. (Including a hard wire notch)

Shallow pockets are liberally scattered around the surface of the pliers. The effect on reducing weight is minimal, they are primarily for appearance.

Skeletool handles are perhaps more complex than that of any other multitool. Not counting rivets, the handles are made up of over ten separate components.

On the "carabiner handle" a skeletonized channel of sheet metal is wrapped around a stack of three backspring plates. Attached to that is a contoured piece of aluminum, containing a pocket for holding the spare screwdriver bit. The bit is held in place by yet another piece of sheet metal.

Finish is brushed stainless all over.

There is no date coding on the Skeletool.

The only folding device on the Skeletool is its locking knife blade. The blade measures 2-1/2" long. (63mm) It is made from 420HC stainless.

A bit driver is mounted in one handle that accepts Leatherman's flattened hex bits. A spring-loaded locking tab prevents the bit from falling out during carry.

The knife blade locks open via a standard liner lock.

Carabiner with spring-loaded gate. The carabiner is intended to also function as a bottle opener.

A spare screwdriver bit is contained in one handle, held in place by a piece of flat spring stock on the handle.

First year models (2008) will have a plain edged 420HC steel blade, while newer models (2009 and up) will have partially serrated 420HC steel blades. This change according to Leatherman was based on customer feedback and real world testing. This is valuable information for the collector as the Skeletool series does not have a date stamp as other Leatherman models do. The Skeletool is also available now in different colors (limited time probably) green, blue, tan and you can still get plain stainless steel. In 2017 REI Outdoors released a topographical graphics edition blade and black oxide frame of the Skeletool along side the Signal that are lasered etched on.

Announced at the 2007 Shot Show. Did not become generally available until early 2008.