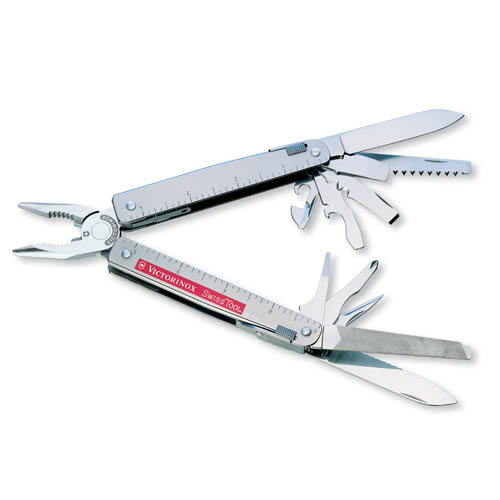 The SwissTool was Victorinox's first foray into the plier-type multitool market. It has since set the standard for quality of design and manufacture. The SwissTool employs outside-opening blades, allowing the user to quickly access them without opening the pliers. This arrangement also makes for a more comfortable feel to the hand when using the pliers. 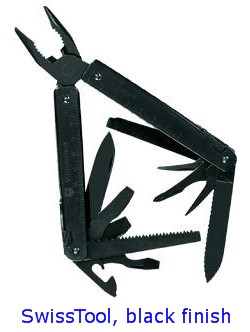 Plier jaws on the SwissTool are best described as semi-needlenose, with tips that are somewhat less pointy than other multitools in its class. The plier jaws have fine serrations out near the tips, coarse serrations in the center, and wire cutters in near the pivot.

At regular intervals throughout its lifespan, Victorinox has incorporated changes to the SwissTool's plier head. (See Variations below) Most significant was in 2002 when the "hand" of the plier pivot direction was reversed. Please check out the SwissTool Plier Heads page for more details.

SwissTool handles are highly polished stainless steel. One side has a metric scale up to 23mm, the other side has an inch scale up to 9 inches. The Victorinox logo and the full word are stamped onto one side, while a red Victorinox SwissTool banner is screen printed on the other.

Upon closer inspection, SwissTool handles are far more complex than they first appear. Each handle is made up of four complex components, the jewel of which is an exquisitely made set of individually cut backsprings. Each of the blades is therefore tensioned with its own individual backspring, a set of precision steel fingers that also prevents unwanted blade "clumping." No other multitool manufacturer has backsprings that can compare.

Like the Swiss Army Knives produced by Victorinox, many of the SwissTool blades are combination tools, with capabilities designed in for two or more functions.

Other models come equipped with scissors and/or a serrated seat belt cutter blade. See Variations below.

The SwissTool has a total of eleven "blades", all of which lock open securely. Lock release is accomplished by means of sliding knurled tabs, readily accessible by either hand.

Later models of the SwissTool have a D-shaped hole cut into the plier bracket which accepts a corkscrew accessory.

Although leather models were offered, most SwissTools are sheathed in a heavy woven nylon affair, with velcro closure. Both leather and nylon models were also available with swiveling clip mounts.

In addition to the original, there are currently three other variations of the SwissTool. The black oxide version is simply the original model with a black finish on all surfaces, including pliers, handles, and blades. The SwissTool "X" replaces the serrated knife blade with a pair of scissors, while the "RS" version replaces both the serrated blade and the file blade with scissors and a curved, serrated belt-cutter blade respectively.
Note that the "CS" model is not really a different variation, but simply the "X" model packaged with separate bits, wrench, corkscrew, and eyeglass screwdriver.

In addition to these official variations, there have been subtle changes incorporated over the years. Changes to the plier head have been most dramatic, including an upgrade in 2002 from right-hand pivot to left-hand pivot. Please see the SwissTool Plier Heads page for more details. Along with the plier head, there have been a number of slight changes made to some of the blades and tools.

A rare variation is the Charles Elsener autographed model. On this tool, the company owner's signature has been deeply etched into the handle scales.

Originally announced in 1997, the SwissTool was not fully into production and generally available until over a year later. However, there was a limited set of models produced in 1997.

After the success of the SwissTool, Victorinox brought out the AutoTool and the SwissTool Spirit. These plier-type multitools share many of the same design principles, including outside opening blades and individual backsprings.