Constantly evolving the design in pursuit of perfection, Victorinox has made a number of changes to the plier head on the SwissTool since its inception. Recent improvements have included two different wire-cutter notches, and added material around the pivot area for increased strength. (See photo above)

Most dramatic was in 2002, when the plier pivot direction was changed. At first glance the reason for this reversal may not be apparent. However, according to Robert Elsener, Quality Manager at Victorinox,

"If you twist a pair of pliers in either direction, the maximum torque until breakage is different. Most pliers are less strong when you twist something counter-clockwise, as if you were trying to loosen a bolt or remove a screw. Counter-clockwise tends to spread the pliers tip apart, whereas clockwise twisting will force the pliers half against one another and be stronger. That's the reason why we reversed the pivot on our SwissTool and SwissTool Spirit new pliers head design."


Note that the advantage of the new plier design only comes into play when the jaws are positioned perpendicular to the bolt head, not parallel. The sketch below helps demonstrate this advantage: 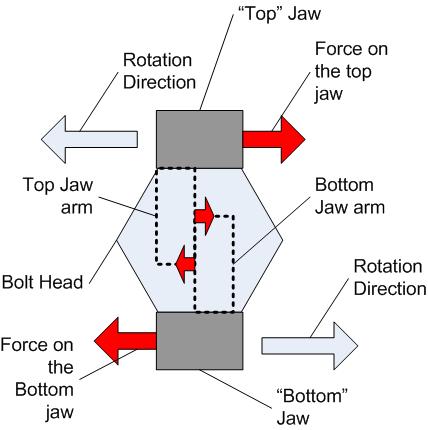