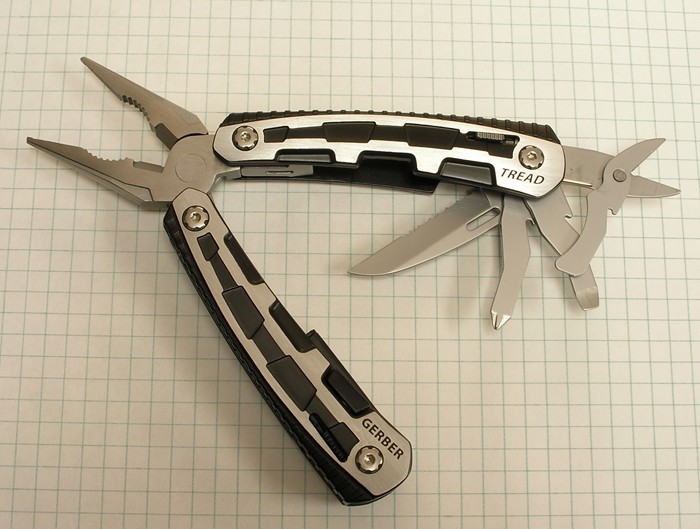 Based on the successful Suspension platform, the Tread was one of four new Gerber models introduced in 2007 that differed mainly in the style and geometry their handles. Being the only tool in this series with an onboard LED light and a partially serrated knife blade makes the Tread somewhat more unique than the others

Plier jaws on the Tread are spring loaded. They have fine and coarse serrations, and an anvil-type wire cutter area near the pivot.

Each handle on the Tread is formed from two halves of cast aluminum. The handle halves are then given a black powder coat finish before the high points are sanded shiny.

The words GERBER and TREAD are cast into each face.

Due to a surprising number of spacers between individual knife blades, handles on the Tread are quite thick, a trait some users find undesirable.

All blades are outside opening, all blades lock open.

All of the blades and tools lock open securely. Lock release is accomplished by a knurled metal slider switch located along the sides of the handle.

The opposite handle contains a white LED light. On/off switch is where the lock release would normally be. Batteries are (2) 675 ZN watch cells.

Tabbed washers (a Gerber standard) are located between each blade, preventing blade "clumping."

Molded/woven nylon construction, with velcro closure. Straps on the back allow for both vertical and horizontal carry.

Introduced in 2007. Manufactured in China.

Other than having different handle styles and an LED light, the Tread is virtually identical to the Gerber Suspension, Crux, Method, and Resolve.

In 2008 the Evo and Ripstop were added to this list.