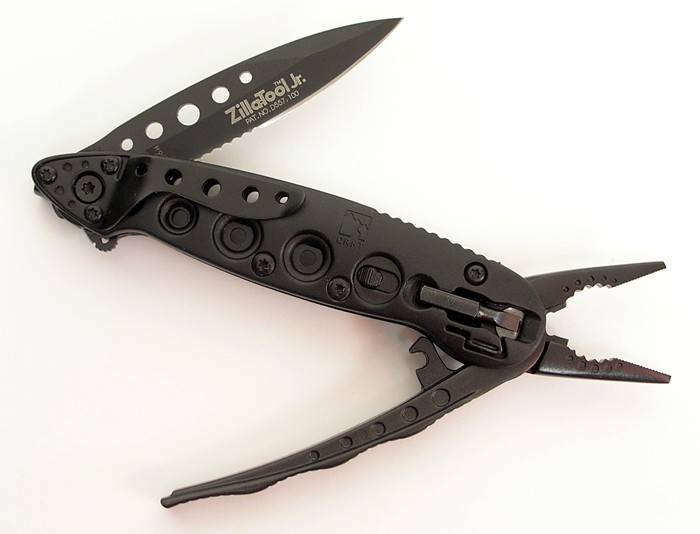 One year after introducing the full-sized Zilla-Tool, Columbia River scaled it down by precisely 82% and named their new creation the Zilla-Tool Jr. Why an 82% reduction? Because that amount shorter and narrower was what CRKT calculated would result in the Jr. model weighing exactly half of what the full-sized Zilla does. Note that even the screwdriver bits are scaled down in size.

Jaws on the Zilla-Tool Jr are semi-needlenose with medium serrations running out to the tip. A course serrated gripping area is in the center. Near the pivot is a wire cutter section, including a hard wire notch.

Pliers are spring loaded with a hidden spring, and they lock in the closed position via an ambidextrous slide switch located in the center of the frame.

The Zilla-Tool Jr is a solid handle design with a fixed plier head. (Head does not fold up into a more compact shape.) Of note, the plier handle itself is wide and contoured, cushioning the grip under heavy loads. Standard finish is bead blasted stainless.

Frame construction is complex, consisting of two halves of cast stainless steel. Contoured plastic grips along the outside are held in place by torx fasteners. Housed within the grips on both sides are spare hex driver bits.

The knife blade has a combination half-serrated edge. It is actuated by a flipper switch, and has no nail nicks or other means of access besides the flipper.

The knife blade is locked in place by a standard liner lock.

In the base of the Zilla Jr there is a hex bit receptacle with a magnetic bit holder. Two hex bits can be carried onboard the tool in cutouts in the handles. Note that these bits have a non-standard 5mm hex.

A pocket clip is secured to the end opposite the plier jaws.

CRKT claims that the Zilla can be employed as a cap lifter by using the gap between the end of the plier handle to pry under the rim of the bottle cap.

Sheath is a woven black nylon affair with velcro closure. Loop on the backside allows for vertical carry only.

The standard Zilla-Tool Jr has a bead blast stainless finish on the metal, with black Zytel plastic handles. (stainless/black)

There is also a black/black variation produced, with black teflon coated metal combined with black handles.

Introduced at the 2008 Shot Show, became generally available that spring.

The earlier Zilla-Tool is virtually the same only bigger. The Get A Way Driver also includes an adaptor allowing the Zilla-Tool Jr to use standard sized screwdriver bits.