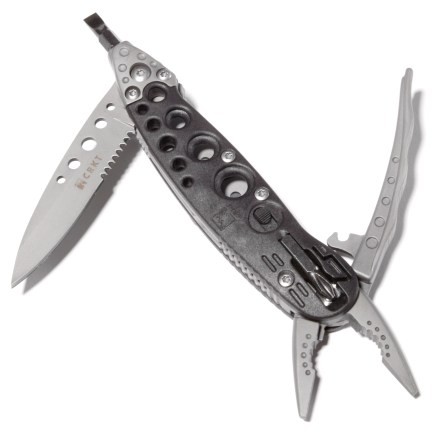 Extremely large as multitools go, the ))Zilla-Tool(( from CRKT is nevertheless quite ergonomic and fits the hand well. Its look and styling are unique, bearing no resemblance to other tools in its class. Quality of construction is excellent, despite the reputation sometimes associated with products made in China.

Jaws on the ))Zilla-Tool(( are semi-needlenose, with medium serrations running out to the tip. A course serrated gripping area is in the center. Near the pivot is a wire cutter section, including a hard wire notch.

Pliers are spring loaded with a hidden spring, and they lock in the closed position via an ambidextrous slide switch located in the center of the frame.

The ))Zilla-Tool(( is a solid handle design with a fixed plier head. (Head does not fold up into a more compact shape.) Of note, the plier handle itself is wide and contoured, cushioning the grip under heavy loads. Finish is bead blasted stainless.

Frame construction is complex, consisting of two halves of cast stainless steel. Contoured plastic grips along the outside are held in place by torx fasteners. Housed within the grips on both sides are spare 1/4" hex driver bits.

Despite its large size, the Zilla only has a single knife blade. Actuated by a flipper switch, this drop point combination blade has no nail nicks or other means of access besides the flipper.

The knife blade is locked in place by a right-hand liner lock.

In the base of the ))Zilla-Tool(( there is a hex bit receptacle with a magnetic bit holder. (Magnet seemed rather weak on early models.) Two standard hex bits can be carried onboard the tool in cutouts in the handles.

A pocket clip is secured to the end opposite the plier jaws.

CRKT claims that the Zilla can be employed as a cap lifter by using the gap between the end of the plier handle to pry under the rim of the bottle cap.

Sheath is a foam-lined black nylon affair with velcro closure. Loops on the backside allow for vertical or horizontal carry.

The standard ))Zilla-Tool(( has a bead blast stainless finish on the metal, with black Zytel plastic handles.

There was also a black/black variation produced (black teflon coated metal combined with black handles) and a black/red version produced with red Zytel handles. The black/red was an exclusive for Sports Authority.

The Zilla-Tool Jr is basically a scaled down model.