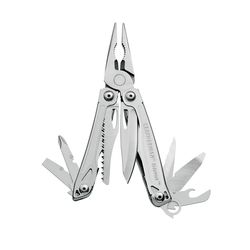 The Leatherman Sidekick is a tool that Leatherman came out with along with the Wingman in 2011 that was aimed at a more budget minded crowd. Being a budget tool they changed a few things on these models to save money. The plier head is a bit different than all the other tools. It has a anvil type cutter vs. the normal bypass cutter and they added spring action pliers. These tools being at a lower price point still are very solidly built tools and are still in production at this time.

Introduced in 2011. Made in the USA. Still in production.

The Sidekick has another tool that is built just like it except for a slightly different tool set the Wingman and another similar tool called the Rev. The Leap is also very similarly built. The handles of the New Wave also have a very similar build and may have been the inspiration for this series. That would also make the Surge and Charge similar. The Wave also has a similar handle type compared with the Sidekick as well.