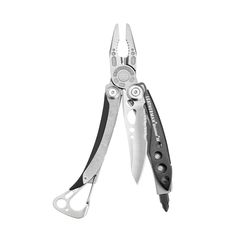 The Skeletool series has been a very well received set of tools. So Leatherman in 2013 brought about a snowboard tool for this tool type. It has an black diamond like coating (DLC) finish on the frame, a combo knife blade, bit driver on one handle and a diamond file built into the other handle.

Plier jaws are larger than the Squirt P4 jaws, but considerably smaller than full size jaws found on the Kick or Charge. Best comparison would be with the Juice series of tools. It has a needlenose/regular set of stainless steel pliers plus a set of wire cutters with a hard wire notch.

Skeletool SX handles are just like the regular Skeletool they are stainless steel but diamond like coating (DLC) have been added to some areas on it and it also has Zytel inserts on parts of it as well. There is no date coding on the Skeletool SX.

The knife blade has a liner lock system.

Carabiner with spring-loaded gate. The carabiner is intended to also function as a bottle opener. A spare screwdriver bit is contained in one handle, held in place by a piece of flat spring stock on the handle. The SX also comes an area that has a diamond file on it but you lose the extra bit space.

Introduced in 2013. Made in the USA. Still in production.